When I looked on Google maps, I saw that it was a mere 6.9 kilometres from where we are at Corindi Beach to Red Rock Beach, however, before I could go to street view and survey the terrain, my internet connection dropped out (yet again), and I was not able to reconnect.

Just short of a 14 kilometre round trip, I thought “How hard could it be?”  Dean and I have been riding much greater distances and I certainly feel more ‘bike fit’ and look forward to riding around appreciating the local environment wherever we happen to be.

I made it up the first hill with the addition of a little huffing and puffing.  I made my way slowly up the second hill, battling the head long wind that seemed to want to push me back the other way.  But I really struggled to make it to the highest point of the final rise.

I could hear Dean yelling in my ear “Drop the gears!” – I lowered to ONE, that easiest of gears that permits the rider to peddle like a demon possessed and hell-bent on getting somewhere, anywhere – eventually anyway!

Dean yelled again “Keep pedalling!” – It’s amazing how much force you can exert down on the pedals when you grip the handlebars and use your arms to pull yourself forward.

“You’re nearly there!” – I could see the top of the rise – way off in the distance.
(Maybe 10 metres but receding in my vision.)

“Keep those chubby little legs moving!” – Like the little engine that could, I told myself “I think I can, I think I can!”

My heart was pounding, trying it’s best to break free of my rib cage, my lungs were whistling and wheezing with every gasping breath in, and every gushing breath out.   My face was burning with the flush of additional blood rushing to the surface of my skin and, all the while, my brain was yelling “GET OFF!  GET OFF AND WALK!”

And I didn’t – at least not until I got to the top of the rise.

I had to stop and catch my breath.  There I was, bent over, head down, butt up, sucking in the O’s as fast as I could and attracting the attention of a passer-by who turned his car around and came back to make sure I was ok.

I was incapable of saying a word but Dean waved him off with a quick “It’s ok mate, she’s just catching her breath!”

All I could think was “How the blazes am I going to be able to ride back?”

And at this stage, we hadn’t even gone half the distance to Red Rock.

When we eventually arrived, taking a lot longer than anticipated, we walked up the Red Rock headland where it was blowing a gale with an incoming storm.  A storm that I must say was nowhere to be seen when we left, but certainly gave us a good enough reason to high-tail it back as quickly as possible.

Plaque at Red Rock in memory of the victims and survivors of “The Bloodrock Massacres”. 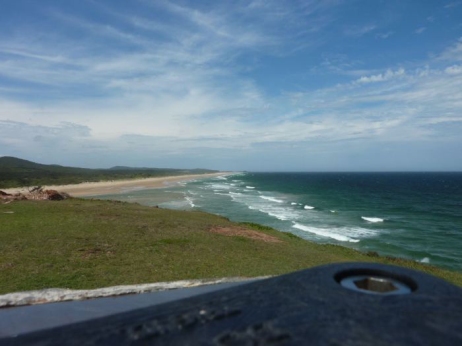 The view of the beach as we arrived with storm clouds that miraculously appeared (seemingly) from nowhere. 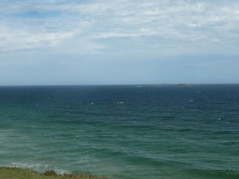 The view of the beach as we arrived with storm clouds that miraculously appeared (seemingly) from nowhere.

Storm sweeping in as seen on our way back to Corindi Beach.