I’m finding it hard to type.

There’s a thorn lodged between the flesh and the nail on the outside edge of my little finger. I tried to get it out, but it’s too tender for me to continue annoying it.

I’ve also got a thorn lodged in the tip of my index finger, a tender spot at the tip of my tall finger where it’s normally protected by the nail, I’ve remnants of several other thorns in the tips of all my fingers and the inside of my thumb, and there is evidence of where thorns have attacked me all over the back of my hand and the knuckles of my fingers.

And that’s just my right hand. My left hand in another story altogether.  Not one thorn, not one mark.  Not one section of broken, swollen, sore, or sensitive skin.

It just goes to show that I’m right-handed and that thorny blackberry bushes are cruel, cruel things.

Only one nasty thorn

Every part of the bush has thorns.  The stems, the underside of the leaves, the edges of the leaves, the branches, the storks of the branches where the berries grow, the little leaves that have opened to allow the berry to bloom.  They are everywhere and they have one job and one job only – to stop anyone trying to pick the fruit of their labour.

But I have to ask, what price would you pay for a bowl of blackberries?  A full bowl of sweet, plump, juicy, wild blackberries simply bursting with flavour?

Would you pick them?  Would you risk the bush grabbing your clothing, preventing you from stepping aside?  Would you risk reaching out to pick a berry only to have your finger jabbed with a razor sharp pointy, needle-like growth?  I would, and I will do it again.  At $44 per kilogram (2.2 pounds), I’ve every intention of picking as many blackberries as I can.

I had no idea though that the blackberry bush was so vicious.  In fact, I think it was called forth to surround the castle where Sleep Beauty lay because nobody, and I mean nobody, gets past the blackberry bush.  Perhaps they should grow them on the fences around penitentiaries.  I’m sure the inmates would gladly stay put.

I declared it would really hurt if you fell into the bush.  Dean laughed and bumped me as he walked past.  I nearly had a coronary right there and then.  My blood ran like ice through my veins and every hair stood on end.  Dean just laughed harder.  He knew he hadn’t bumped me hard enough to lose my balance, but that didn’t ease my feeling of panic and sheer terror.  The bush is taller than me.  It’s been there for a long time.  Some of the branches are thick and woody with thorns hypodermic in stature.

Then Dean said, “If you fall in, I’ll have to call SES to get you out!”

That only made things worse causing me to dream that I did fall in and then Dean just walked away, slowly moseying back to the house to get his phone to make the call.  All the while, I’m lying in a murderous bush of thorns and prickles, a tear rolling down my cheek, wondering why he didn’t flag down a passing car.  Why?  Because he was laughing so hard.  I’m normally the brunt of his jokes, but being so in my own dream really does take things too far.

I wanted to laugh when Dean said he’d have to call the SES, but the thought of the State Emergency Services coming to cut me free of those vicious thorns only increased my terror. How long would it take them to arrive? How much pain would I suffer waiting for them? If they arrived in a helicopter, would the downdraft only increase my pain?

What if the SES volunteers are unable to help me because they can’t stop laughing?

One thing is for sure, even though I’ll continue to harvest the berries, I will do so very carefully. 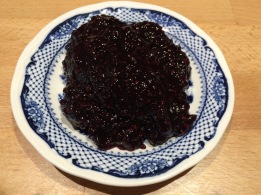 Not tarty, but not sweet either

My first effort at using the berries turned out pretty awesome and may not be my last effort either.  I’m thinking Blackberry Crumble, Blackberry Compote, Blackberry Muffins.  Mmmm muffins!

I typed up the recipe I came up with – see Wild Blackberry Jam on the Recipe page – and although the quantity of blackberry is a little vague, the end result is wonderful.  Over the last two days, we’ve had jam on toast, jam on hot cross buns, and jam with yoghurt.

Dean says it’s the blood, sweat and tears – and just a little bit of fear – that makes the jam so good.

What more can I say?