It was one of those nights when there was either nothing to cook for dinner, or I simply couldn’t have been bothered.  Actually, there was nothing to cook, so we headed over to St Georges Basin (five minutes drive away), where we found ourselves at the Cooee Hotel.

Because it’s on the menu, naturally I had the Chicken Parmigiana and Dean had the Chicken Schnitzel.  We were both hungry, and hence ate the meals we ordered, but in hindsight, we got what we paid for.

Chicken
As far as I could tell, the schnitzel was breast meat and it was tender.  The crumb was crisp and crunchy – at least to begin with anyway.  After a short time, the sauce and the salad dressing made the crumb soggy and it fell away from the chicken.

I ate the chicken around the outside in the hope that I would miss all the sogginess and although I couldn’t eat all of it, Dean declined my leftovers.  (There’s a first for everything I guess.)

Sauce
The sauce was not as good as I’ve had elsewhere.  There was a huge amount of capsicum in the sauce which overpowered the flavour of everything else making it the only thing I could taste, and despite the amount of ham, I couldn’t taste it at all.

The amount of cheese was good, but sadly, the cheese was dry and I don’t even know how that happens.  I can only surmise that it was under the grill for a little too long.  It looks burnt in the photo, but I must say, it didn’t taste burnt.

Extras
Initially I thought the salad was an afterthought on the plate, but it did have a lot of ingredients: a couple of lettuce leaves, two wedges of tomato, a couple of slices of cucumber, three onion rings, a few strips of carrot, a slice of orange, AND – too much capsicum and too much dressing. Unfortunately, the excessive dressing ran all over the plate and ruining the schnitzel and threatening to ruin the chips.

The chips were amazing and before they spoilt completely, I moved them away from the salad and where the dressing was pooling on the plate.  They were fresh and crispy, and my plate had just the right amount – not too many, not too few.

I gave this Chicken Parmigiana 4.3/10 overall because it actually sits exactly between 4.5 and 4.0 on My Parmigiana Richter Scale:

Next time we decide to dine out though, we’ll drive the extra five or ten minutes to Huskisson and go to the The Huskisson on Jervis Bay, where I’m told we will enjoy a much nicer meal.

Quick update:  Yesterday I was having a chat with the neighbour (across the fence while I watered the plants) and she said “Oh!  Don’t go to the Cooee Hotel.”  Enough said. 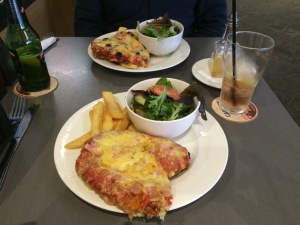 We were so busy when we were in Hobart (and the balance of our time in Tasmania), that I failed to post a review. 😦

We were on our way to the Cadbury Factory and stopped for lunch at the Claremont Hotel.  I had the Chicken Parmigiana – Topped with our house-made Napoli sauce, bacon and grilled with melted cheese.  The other meal in the photo is Dean’s – Chicken Supreme Pizza Parmigiana.

The chicken was all breast, moist and tender – too much for me to eat all of it.  There was a perfect amount of sauce, if perhaps a little too much cheese. There was only a couple of chips and a small bowl of salad but both were nice.

This was a really good meal (compared to the one above) and I gave it 7.3/10 overall, and for the record, Dean really enjoyed the addition of the Supreme Pizza trimmings on his.

Don’t forget to check out My Parmigiana Richter Scale and see where these Chicken Parmigianas sit in relation to the others I’ve reviewed on our trip.