The other end of The Great Ocean Road

After three exhausting days along The Great Ocean Road, Monday (our fourth day) was grey and drab.  It had rained all night, was still raining when we woke, and the rain then settled in and refused to blow away despite the (near) gale force winds that had arrived overnight.  We spent the entire day huddled inside our mini home.  The temperature struggled to get into double figures (50°F) and all my plans for taking sunset photos washed away.  We were a little disappointed that our last day was so miserable.

We rolled out of the Port Campbell Holiday Park early on Tuesday morning with Yambuk Lake our next destination.  Dean had found the lake online and thought it would be a great spot to see out our time in the south west reaches of Victoria.

Naturally, the weather followed us as it usually does, but at least it wasn’t heavy rain, just intermittent showers and Dean and I cannot allow the weather to spoil enjoying the areas we find ourselves.

Yambuk Lake is only a short drive from Port Fairy, and an hour from Portland, and we took the opportunity to visit both. Port Fairy is very pretty and we enjoyed a walk around Griffiths Island because I wanted to see the lighthouse.  The island is accessible by foot and forms part of the Port Fairy and Belfast Coastline Protection Reserve. 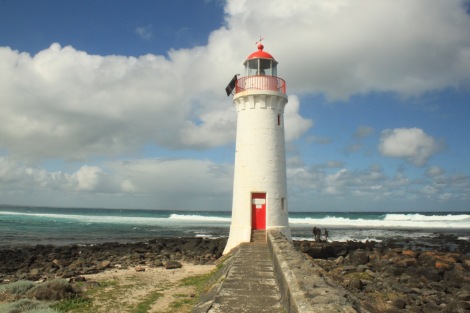 Griffiths Island Lighthouse was built as a navigation aid in 1859 when Port Fairy was becoming an important trading port for western Victoria.

The seas were huge, at 10 foot

Our new friend Maggie followed us all the way around the island.

At Portland we took a right turn and followed the road to Cape Bridgewater where we walked around the Petrified Forest and the blow holes.  We spent some time exploring this eerie landscape and the nearby blow holes before returning to the Cape Bridgewater township where we then walked out to see the local seal colony.

Such a barren landscape

Called the Petrified Forest, but in fact a collection of hollow limestone tubes.

The tide was too low for the water to explode out of the blow holes, but made a spectacular sight smashing into each other

After an hour walking up and along the highest cliff in Victoria, we didn’t see any seals and discovered later that the wind was not blowing in the right direction.  Apparently, not only was it far too cold for me, but it was also far too cold for the seals.  The wind was brutal, increasing the chill factor and drastically dropping the apparent temperature to freezing.  Out of the wind, it felt so much warmer, by at least 10°C (18°F I think).

We returned to Portland and enjoyed the ‘best ever’ $10 lunch at Mac’s Hotel and then photographed another couple of lighthouses. 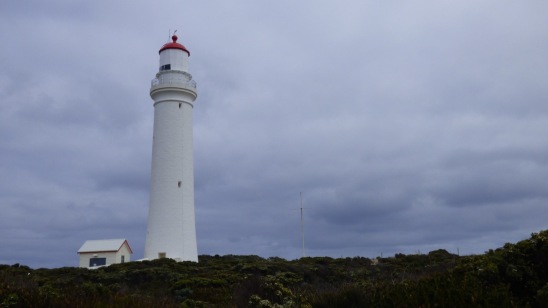 Cape Nelson Lighthouse, completed in 1884, at a time when there were fears of a Russian invasion of the Pacific.

Originally erected on Battery Point in 1859, the lighthouse was relocated, stone by stone, to its current position on North Bluff (now Whaler’s Bluff) in 1889 to make way for gun emplacements on Battery Point.

Yambuk Lake Caravan Park is nestled on a slight rise overlooking the inlet to the lake.  The park is only small, but very popular, hidden away in a quiet little pocket where huge, vegetated sand dunes separate park from the beach and the roar of the ocean.

The lake is a great place for fishing, and Dean even caught a juvenile salmon and released it back into the lake.  We enjoyed a walk out to the beach, but didn’t stay there long as the

We rolled out of Yambuk yesterday morning and left the far south west of Victoria behind.  We are now at Halls Gap in the Grampians National Park and looking forward to some serious bushwalking before we (finally) head towards South Australia on Sunday.