Thoughts on Locations No 45 and 46

After leaving Victoria, our original intention was to stop over in Bordertown, but considering the driving was very easy, we decided to keep going and ended up stopping at Murray Bridge.  We thought this would be a good place to rest before moving on a little further.  This was one of those few times we’ve driven any great distance in one day, and after discovering a busted Anderson Plug on our mini home, we ended up staying two nights so we could organise someone to fix the plug.

Entering Murray Bridge from the east we saw the most bizarre thing – daisies growing everywhere.

Daisies in a paddock

Along the side of the road

They were growing in gardens, on the side of the road, everywhere that had recently seen a drop of water, and (quite frankly) anywhere they’d been able to get a foot hold.  I’ve come to the conclusion they are a rampant ‘weed’, but all the same even though this ‘weed’ was prevalent, they looked rather stunning.

We stayed at the Avoca Dell Caravan Park on the outskirts of Murray Bridge.  The park is set in peaceful and scenic surrounds with several terraced levels, each one overlooking the Murray River and this was a lovely area in which to relax after all our Bushwalking in The Grampians.

After leaving Murray Bridge behind, caravan electronics all fixed and back in order, we headed south and into the Fleurieu Peninsula region and stopped in the city of Victor Harbor.  Set on the coast at Encounter Bay, Dean thought he’d get a surf in this area, but this was not the case.

We spent three days exploring the local area, visiting a few of the major attractions – Granite Island and Rosetta Head, locally referred to as The Bluff.

By far though, the day we spent exploring the coast between Victor Harbor and Cape Jervis was amazing.  Dean finally found a surf beach and had a quick surf – the water is still cold, so he was only in for a sort time – and then we continued our exploring.  Here’s a few photos. 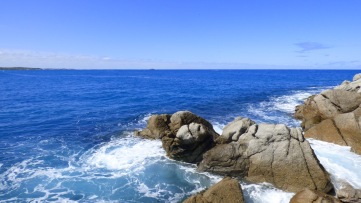 The blue of the ocean was breathtaking – taken from the jetty , east side of Rosetta Head. 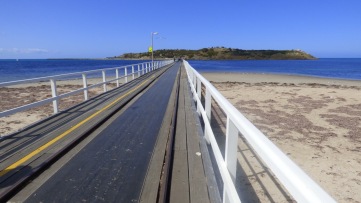 The causeway over to Granite Island.

View of Rosetta Head from Granite Island – yep, I climbed that.

A Nankeen Kestrel riding the currents.

The view west from Rosetta Head.

Dean finally on a wave. 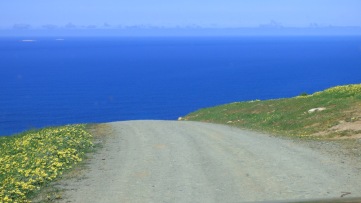 Driving ‘off’ the end of Australia and into the waters of the Great Australian Bight (or the Southern Ocean).

(The other side) The road down to Tunkalilla beach.

We stayed at the Victor Harbor Beachfront Holiday Park and although it was busy with families enjoying the last few days of the schools holidays, the park was rather quiet.  Two things were surprising, free internet with 500 Mb daily allowance, and shower screens in the amenities.  Wow!  Free wireless internet is not unusual, but the daily limit offered is normally 50 Mb or 30 minutes (whichever one runs out first), so it was a treat to have 10 times that much (without a time limit) and this caravan park is only the second park we’ve stayed at that has shower screens.  It becomes such a luxury to take a shower without water getting everywhere wetting everything – clothes, towel, toiletries – everything.

Today we are taking the ferry over to Kangaroo Island, one of South Australia’s most popular tourist attractions, and will have four days to explore this little gem.