Uncrowded waves, wide open spaces, not a lot of people. It sounds like a surfer’s utopia, as long as you’re the type who’s geared for all that unfiltered Indian Ocean groundswell.

The Surfer’s Journal (You can read more here.)

Margaret River is one of Australia’s iconic surfing locations with 75 surf breaks along a 130 kilometre (80 mile) stretch of coastline and, the golden rule among the locals is:

“If you find yourself looking at a good wave, go surf it!”

For Dean, it was like being a kid in a candy store, with breaks abounding up and down the coast, and not knowing which one to choose from next.  We were staying at Prevelly Beach, right near Surfers Point where you find the world-famous Margaret River Mainbreak, apparently one of the most consistent waves along the entire coast. 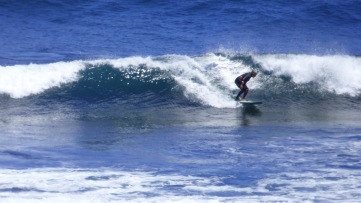 There are several breaks at Surfers Point, but mainly it’s known for Mainbreak and Southsides.  Both offer great rides for goofy-footers and naturals (left and right handers).  My goofy-footer chose to surf Mainbreak, and because it can often reach 20 feet, I was nervous about Dean out there in the water.

But he’s a big boy, and I needn’t have worried so much.

But then again, perhaps I was worrying for all the right reasons when I saw him getting smashed.

See the tip of his board at the bottom 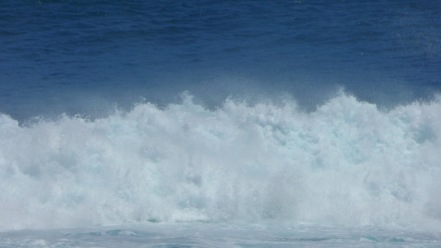 He’s under there somewhere 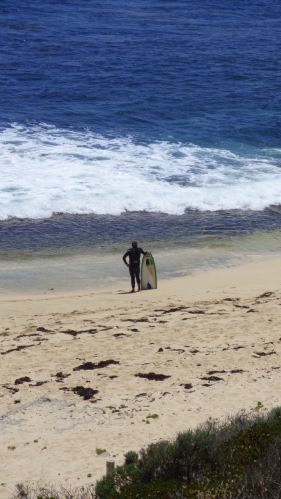 Finally found him, back on the beach

Do you see him crying?

Thank goodness he surfaced and the only casualty was he favourite board.  Dean’s had that board for a very long time.  It was taken to Samoa in 2008, although it arrived five days after we did, and it travelled all the way to the Maldives in 2010.

Both times it behaved beautifully and arrived home safe and sound – and unscathed.

But it didn’t survive our trip around Australia.  I guess this means that when we get home, he’ll be wanting to buy another 7S Super Fish.

You can read what Dean had to say on the Surfing page.

Thoughts on Location No 65

We stayed at the Prevelly Caravan Park, oddly enough at Prevelly Beach, and (almost) walking distance to Surfers Point.  The park itself is very old and tired, and desperately in need of some finances to spruce it up, but we had a good site and were comfortable enough while we were there.

Not that Dean spent a lot of time at the park, he was in the water as much as possible enjoying the surf and paying homage to Neptune, or Odin, or Poseidon – whoever it is he prays to and thanx for surfable waves to ride.