Some Eaten But Not Forgotten Parmies

I have reasons why I order Chicken Parmigiana, (see this post from November 2014), and I still stand by this choice I make, but in the last 15 months, I have discovered despite there being some exceptional parmies out there, occasionally you come across a bad one, and it’s not always the price that determines the quality.

We arrived after 6:00 pm to find the hotel less than busy – ok, there were only a few people there causing me to ask if they served meals in the bistro on Sunday nights.  We thought we would sit outside, but the smoking laws are different in New South Wales than in Queensland and one whiff of the dirty ashtrays full of butts and we turned around and went back inside. This should have been sufficient evidence to make us leave, but I was looking forward to my favourite pub grub and could only focus on that.  As we sat waiting for our meals, I noticed just how dirty the dining room was.  I think it had not seen a broom or mop for quite some time.

The chicken was not whole breast, the chips were soggy and the salad had seen better days after being left under heat lamps.

I gave this Chicken Parmigiana 2.5/10 overall because, upon reflection, it may have looked good and seemed nice when I started eating, but it’s almost as if the meal deteriorated before my eyes and before I had a chance to actually enjoy it.

Final thought – if it looks bad or smells bad, or even feels bad, then it probably is bad.

We were told that if we went to the Yarrawonga Hotel for a meal, it would be really good, and it was, so good, I can still write about it four months later.

The chicken was amazing, all breast, moist and tender, and for a change, not too much for me to eat all of it.  The crumb crispy and stuck to the chicken.  There was a perfect amount of sauce, and despite the photo, not too much cheese. The chips fresh and crispy and the salad fresh and generous.

The (pre-made) salad cold and fresh, but the chicken was processed meat.  A little disappointing because it was cooked to perfection, tasted really good, and the amount of sauce and cheese added (for and additional $2) was spot on.  The chips were fresh and crunchy, albeit minus any seasoning, but I added as much as I wanted, and that’s ok. 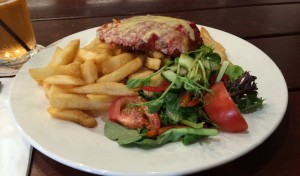 The chips were fresh, but there was so many of them they covered half the plate.  The salad was fresh, I do remember that, but the chicken portion was very small.

This was not a remarkable meal as I’m struggling to remember it.  Sad I know, but what I do remember was the plate of food was huge.  Sadly though, the plate was all chips and salad and very little Parmie and attracted an additional charge for the Parmigiana sauce.

While my dear friend Denise visited over Christmas, and she and I disappeared into the Southern Forests, we stayed in Pemberton and chose to enjoy our diner at the “the place the locals come to eat!”

The chicken was processed meat, thin, and tasteless.  The crumb was soaked in oil that was melted all over the plate together with oil from the cheese and the sauce was devoid of any flavour.  The chips were beer-battered and fresh and the only thing I ate.

This meal was the worst food I’ve ever paid for, and it went uneaten.  It was almost so bad I considered never ordering a Chicken Parmigiana again – ever.

(Only because the salad was self-serve and I managed to raid a bowl of lettuce leaves and found three cherry tomatoes.)

Not to be deterred by that bad experience, when Denise and I reached our next destination, we couldn’t help ourselves and ordered another Chicken Parmigiana.  We couldn’t have two nasty meals, could we?

Thankfully the chicken was all breast, moist and tender and almost too much for me to eat all of it, though I did because we’d not eaten all day and hunger finally caught up with me.

The sauce was lovely, the inclusion of the sweet potato chips and shallots refreshing.  The chips fresh and crispy and the salad perfect – exactly what I needed from a self-serve salad bar.  This was a really good meal and wholeheartedly enjoyed considering the company of my dear friend (and our previous horrible experience).

And Only Four Days Ago

While in Cervantes, Dean and I went to the Country Club for dinner on our last night.  It was Parmie Night – $20 for a Chicken Parmigiana and a pint of beer.  For those who don’t know how much beer that is, (and I didn’t), it’s a huge glass that holds 570 ml (20 fl oz).  Dean drank both while I sipped a diet coke.  Someone had to drive.

The club had six different parmies on offer.  I opted for the Hawaiian, Dean opted for the Kiwi.  The Hawaiian speaks for itself (I hope), but to explain the Kiwi, it was served with a garlic cream sauce and garlic prawns.  While Dean enjoyed every mouthful, I struggled to eat what I could of mine.

The photo doesn’t lie, the schnitzel was chicken breast and absolutely enormous.  Large enough that two pineapple rings fit on the top.  I looked at it and thought “Just as well Dean’s meal is smaller because I’m never getting through this!”

There was too much sauce on the schnitzel and this combined with the pineapple cause the crumb to dissolve and melt away from the chicken.  A shame really because the inclusion of the pineapple gave the parmigiana a completely different taste, not unlike a Hawaiian Pizza.  The salad was very sparse consisting of a few lettuce leaves, slices of cucumber and lashings of red onion, and an oily dressing.  I did eat the cucumber slices, but that was all.  The chips were soggy under the schnitzel and, like the salad, I chose not to eat them.

Despite the sad salad and chips, I enjoyed the inclusion of the pineapple.  Dean rated his much higher but agreed with me regarding the salad and chips.

Don’t forget to check out where these Chicken Parmigianas sit on My Parmigiana Richter Scale.

Dean and I don’t dine out a lot, on average only once every three weeks.  I’m proud to say I’ve reviewed 20 Parmies now over the course of 15 months, with The Entrance Hotel in New South Wales still sitting at No 1.

Despite a few nasty experiences, Chicken Parmigiana is still my favourite Pub Grub.