Thoughts on Location No 76

This was our second location on the fringe of the Ningaloo Marine Park and during our two days in Coral Bay, we decided to take a Turtle Tour with Coral Bay Ecotours.  Truth be known, we wanted to go snorkling or diving with whale sharks, but unfortunately the season hadn’t started and therefore we had to choose to do something else.

The Turtle Tour was a three-hour tour, setting sail from a tropical port, aboard a tiny ship.  Dean and I couldn’t help but giggle and think of Gilligan and hope we wouldn’t suffer the same fate as those aboard the SS Minnow.

Our mate was a mighty sailin’ lad,
Our Skipper brave and sure,
And we were eleven passengers,
Off on a turtle tour.

The sea was calm, blue and beautiful and the tour a perfect way to escape the relentless heat.  The tour included visiting a turtle sanctuary and two different snorkelling locations.  We were lucky enough to snorkel with a turtle at the first spot, see countless turtles at the sanctuary, and were shown a huge variety of corals through the glass bottom of the boat.

There are more than 200 different species of coral found in Ningaloo Reef, but I was disappointed we didn’t see more vibrant colours.  Corals we saw were huge cabbage coral, brain coral, staghorn coral, and even dreadlock coral unique to Ningaloo Reef, a coral that looks strangely like dreadlocks growing up from the sea floor.  But sadly they were all lacking colour with the exception of the staghorn coral that had new growth on the tips that were bright blue and a couple of other blue corals of some unknown variety.

The fish by contrast were very bright and almost psychedelic.  Dean had fun taking photos underwater with his GoPro, but the photos don’t do the fish justice.  The highlight for me was seeing a black tipped reef shark.  It was only small, a little over three feet in length, but large enough to give me an overdose of adrenaline (ha ha).

Yes, I could NOT get out of the water quick enough.

Here’s a few photos to enjoy. 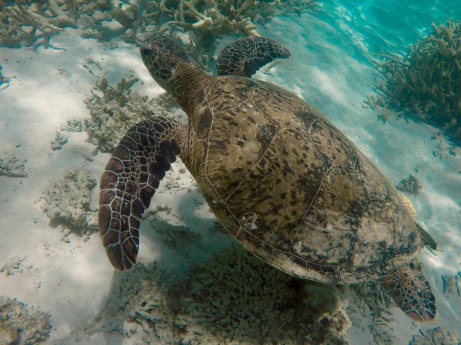 Are they drinking Corona? 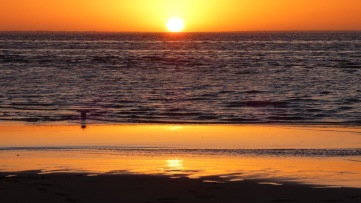 Such a lovely sunset 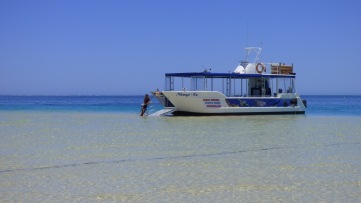 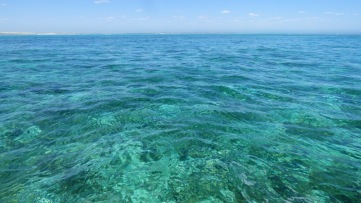 The water was so inviting 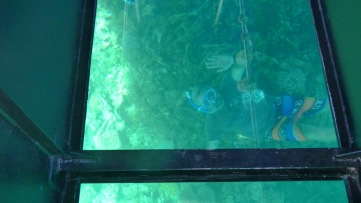 We spent two nights at the Peoples Park, a perfect location to escape the crippling heat that has blanketed Western Australia over the last week and will continue to do so for a few more days yet before letting up.

When we arrived, we took a quick walk around the park to assess the available sites, and before we’d gone very far at all, Dean said “What the heck, let’s pay the extra money and camp on the beach front.”  And so we did.

Normally we get a deal where we ‘pay for two and stay for three’, but this time it felt like ‘pay for three and stay for two’.  But I must say, with temperatures above 40 degrees (104+), neither of us minded.  The park was lovely, directly across the road from Coral Bay Beach and the first grassy site we’ve been camped on since leaving Yellingup back in late November.

I’m a little behind with my updates as we’ve been in a remote location with no TV, radio, or internet.  We have no idea what is going on in the world, what the latest song is that’s hugging air time, and without internet, I’ve not even been able to Google the latest news and events.

Dean and I are still in a remote location as we travel north to our ultimate destination – Broome.

I’ll try to catch up over the next couple of days – internet access permitting.