The Whitsunday Islands, or simply The Whitsundays as it’s more commonly known, is a group of 74 islands protected by the World Heritage Listed Great Barrier Reef.  This is only one slice of paradise in Queensland and it lies pretty much smack-back in the heart of the Great Barrier Reef.  Actually, just a short (expensive) flight away is Heart Reef, but we declined the temptation to spend that much money.

Most of the islands that make up The Whitsunday are beautiful and tropical, covered in dense rainforest, but deserted and uninhabited.  Among the 74, there are only eight islands that offer accommodation, each with fringing coral reefs at their doorstep.

Boasting white sandy beaches, most of them palm-fringed, secluded, and surrounded by clear blue waters, The Whitsunday are the perfect example of what a tropical paradise truly is.

Dean and I decided that amid all the beauty on offer, there were two things on our wish list: Cruise around some of the islands and see Whitehaven Beach.

It’s hard to believe after all the years we lived in North Queensland, with The Whitsundays in our backyard (so to speak), we’d not done either.  We have, in what seems like another lifetime, enjoyed a five night stay on Daydream Island when our girls were very young.  That was more than 23 years ago and our girls still talk about the wonderful time they had during that little holiday.

We were fortunate to be able to tick both items off our wish list with Providence V Whitsundays. 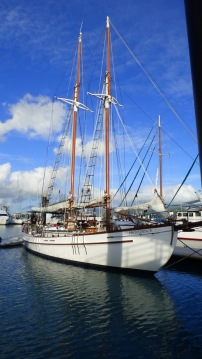 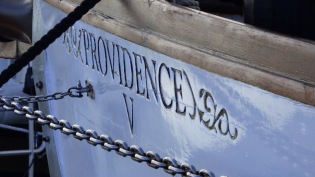 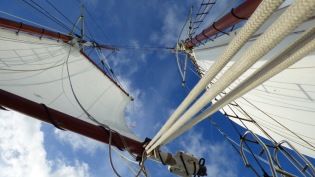 We spent the day on board the Providence V, a schooner that is actually a baby tallship.  Up bright and early, we headed out of port just after 7:30 am, and didn’t return until almost 6:00 pm.  We sailed out through Hook Passage and the onto the east side of Whitsunday Island where you find the famous Whitehaven Beach.  I was surprised this took four hours, but that amount of time didn’t matter.

You can click here to see where we went.

We walked up to Hill Inlet Lookout, along the white sands of Whitehaven Beach, declined a swim due to stingers, and clambered back on board for lunch before snorkelling among the protected corals around the tiny Dumbbell Island, said to be among the most magnificent coral in the Whitsundays. Dean was certainly delighted with what we saw.

We had a full day.  It rained and we got wet.  The wind blew and we dried off.  The ship rocked and rolled, and I turned green (several times).  The clouds obscured the Sun, then melted away and returned again.  We saw the Sun setting and the Moon rising.

Sails of our mini tall ship 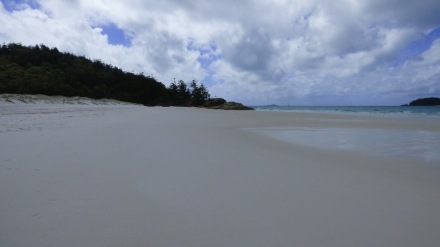 Whitehaven Beach, not looking so white

We were not the only people praying for clear skies 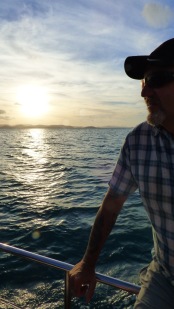 Dean was right at home 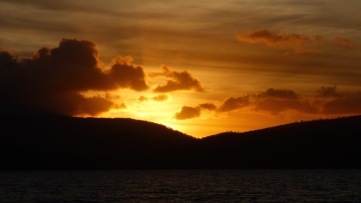 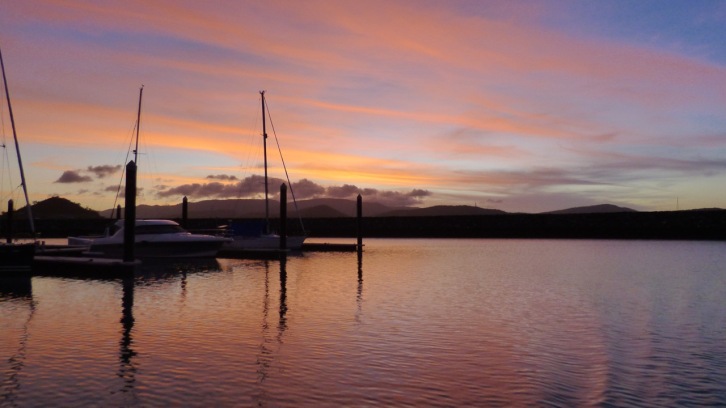 Despite feeling rather sick with the constant up and down motion, I (we) enjoyed a lovely day out on the water.  Though I did declare it would be the last time I got on a boat of any kind.

Thoughts on Location No 100

When last we’d been here, Airlie Beach was a small, sleepy little township – simply a place to catch a ferry across to an island.  Now, 23 years later, it’s a thriving little metropolis with everything and anything you could want or need available to purchase from an assortment of supermarkets, hardware stores, and speciality shops and outlets, with housing estates, and holiday rentals sprawled across and up the foothills that overlook the harbour.

Beyond all of that, it’s a tourist mecca, a haven for backpackers, and we were speechless regarding the sheer numbers of foreign tourists (aka backpackers) we encountered in the hour we walked around.

The park was home to several Bush Stone-curlews.  Their eerie, high-pitched wailing at night was refreshing to hear, but I can understand why their cry is often described as ghost-like.

It was so funny to see them running then suddenly stopping, freezing mid step, almost as if they thought you couldn’t and wouldn’t see them is they stood there pretending to be little statues.  This is a defence mechanism, as is their amazing plumage that allows them to easily hide on the ground amongst the leaf litter.