Queensland’s Discovery Coast lies between the cities of Gladstone and Bundaberg, only 5½ hours drive north of Brisbane, the state capital, and the place we’ve called ‘home’ for the last 23 years.

This part of the Sunshine State (and I use that term loosely) is called the Discovery Coast because this is where Captain James Cook and the crew of HM Bark Endeavour first landed in Queensland during Cook’s first voyage of discovery back in 1770.  Right in the middle of the Discovery Coast you’ll find the town of Agnes Water and its sister township Seventeen Seventy.

Agnes Water is where all the action happens.  Here you find the local shops, a little supermarket, a hotel, tourists and tourist information.  It’s where most of the holiday accommodation is, where most of the population resides, but all the fuss sits firmly with Seventeen Seventy.  Also written in numeral form, and I’m guessing the only place in the world with a number for its name, 1770 was known as Round Hill before the name of this sleepy little (fishing) village changed in 1970 to commemorate the bicentennial of Cook’s visit.

I expected to find a statue, much like the one in Cooktown, but was (a little) disappointed to find only a cairn to commemorate the occasion.  Better a cairn than nothing at all. 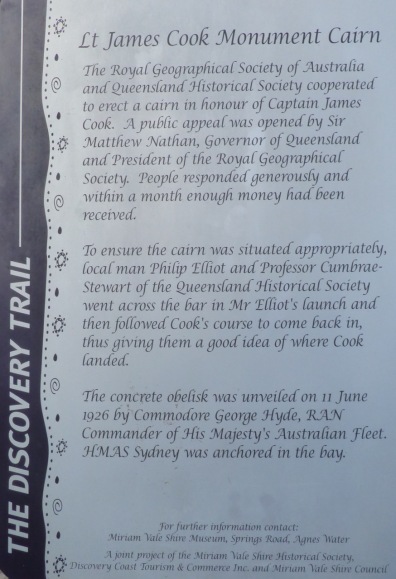 Information at the cairn 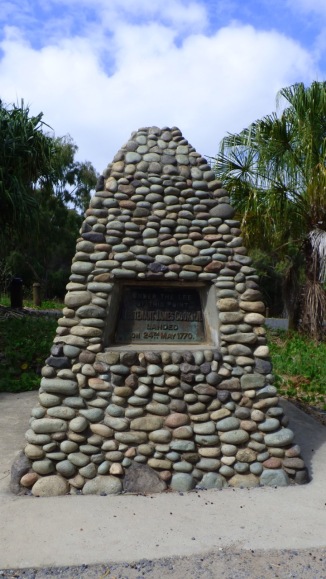 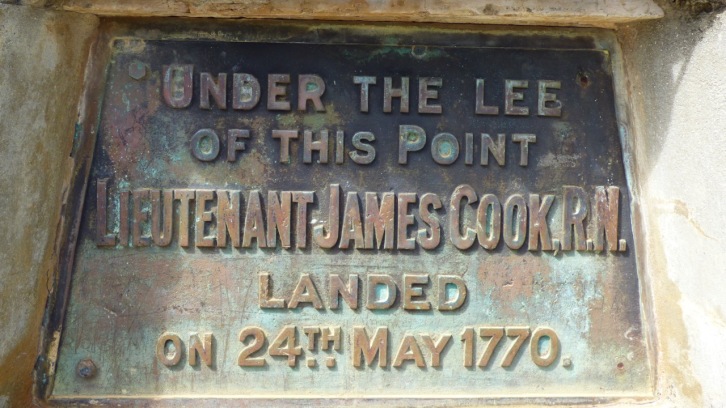 The community of Seventeen Seventy hold the re-enactment of this historic landing each year as part of the 1770 Festival held in May.

Thoughts on Location No 102

Queensland has been known as the Sunshine State for as long as I can remember.  Actually, according to this article, The Sunshine State was the official theme song of the Queensland Centenary Celebrations back in 1959, and that IS before my time.

But sunshine is the one thing we’ve been lacking lately.  Perhaps this is because the 2015–16 El Niño is in its final stages, and some much-needed rain is arriving.  Who knows?  Whatever the cause, we’ve been caught up in some wet weather and that makes it hard to get out and about.  Unless you’re a duck, or you like surfing.

We stayed at the Agnes Water Beach Caravan Park. It was only a small park and I think we were very lucky to get in, securing the last available site for four days.  The park had exclusive access to the beach where Dean found a wave to surf, although he admitted it was tough going after almost six months.  Granted Dean paddled out onto a wave when we were at Kalbarri back in late January, but I’m not counting that as he was only in the water for 30 minutes.  The last time he’d had a decent surf was early December and he’s really missed being at one with the water and the waves.

I was really surprised there was a wave, but discovered this is Queensland’s most recognised northerly surf beach due to a weird (or crazy) phenomenon where waves generated in the Coral Sea form off the northern tip of Frazer Island and then get pushed in as they are forced off the southern tip of the Great Barrier Reef’s Lady Elliot Island.  Wow!  All these years I thought the Great Barrier Reef prevented waves reaching the shore.

As we make our way further south, past the southern edge of the Great Barrier Reef, finding a wave won’t be an issue.  Finding some sunshine to match might be.