Not only is our trip back to where it all began, so are my Chicken Parmigiana reviews.  On Sunday night, we toddled over the Dicky Beach Surf Club, where I couldn’t resist ordering the Dicky Beach Parmigiana again – served with Napoli, bacon, avocado, cheese and hollandaise sauce (and chips and salad).

My last parmigiana review was three months ago when we were in Karratha, although I have eaten one since and flatly refused to write a review.  (Yes, it was that bad.)

So it’s been some time since I’ve ordered and really enjoyed my favourite pub grub, and I was looking forward to a meal I believed I would enjoy.  Thankfully, the surf club did not disappoint. 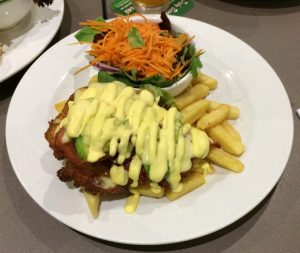 The chicken schnitzel was perfect.  Just the right size for me, though I’m guessing some hungry men might think the serving is a bit small.

It was all breast meat, moist, and tender.  The crumb was cooked perfectly with nothing burnt and it remained firmly attached to the chicken.  There was a nice amount of bacon on top – not too little, not too much – and although at times it can be very difficult to pick a perfect avocado, I thought the avocado slices were as close to perfect as they could be.

Sauce
I can’t even remember tasting the Napoli part of the sauce, though I did see it, and yet what made this meal so good was the lack of sauce.  All too often, too much sauce gets poured on top of the schnitzel, overpowering it with spicy tomato and hiding the flavours of everything else.

I’m glad there wasn’t much sauce because I was able to taste everything – the chicken, the bacon, the avocado, and the cheese.  Speaking of cheese, there wasn’t too much of it either, just the perfect amount.

I was a little reluctant about the hollandaise sauce and almost asked for it to be ‘on the side’, though I needn’t have worried.  As you can see from the photo, there was quite a bit on top of the avocado, but no so much that it was all I tasted.

Extras
The salad was the only thing that let the meal down.  It was presented in a small bowl and was a huge handful of fresh, crisp mesclun leaves.  These were topped with only one piece of tomato, lots of slices of red onion and copious amounts of shredded carrot.  Sadly, the only part of the salad that was dressed was the carrot, but upon reflection, there were a few pieces of cucumber scattered throughout those mesclun leaves, and I did eat all of the salad.

The chips were amazing, fresh and crunchy, salted just right, and there wasn’t too many of them despite how abundant they look in the photo.  As I normally do, I moved the schnitzel off the chips but had I not, I don’t think they’d have been ruined as there was not an overabundance of sauce leaking off the schnitzel and all over the plate.

On averaging the scores, this meal receives 9.8, but I believe it deserves a higher score than that.  I ate everything on my plate, the chicken was cooked perfectly, the crumb stayed on the meat, the chips were amazing, and at the end of the day, the salad a huge improvement on what was served 19 months ago.

So in making my final decision regarding the overall rating, I gave this Chicken Parmigiana 9.99/10 and placed it at position No 1 on My Parmigiana Richter Scale knocking off The Entrance Hotel, at The Entrance in New South Wales.  And . . . drumroll if you please . . .

I hereby declare a Queenslander the winner 🙂

This meal was beyond good.  I OMG’d my way through it, didn’t give Dean a taste, and had nothing left on the plate much to Dean’s dismay as he’d ordered the Battered Barramundi and thought he’d get to finish my parmigiana.

Again, I have to say, this meal was a huge improvement on the one I had 19 months ago.  That meal only rated 7.5 because the chicken was grossly oversized and although the salad was a mixed variety of vegetables, it was badly wilted from sitting under a heat lamp and almost inedible.  In fact, on that night, Dean didn’t touch his salad at all.