The surf provided Dean with entertainment, the beach provided me with a great place to walk, the surf club provided us with a great place to eat, the warmth we experienced was incredible (considering it is supposed to be winter) . . . but . . . and it has to be said, at times the wind was a little scary and more than once the rain was relentless.

The sunrises were amazing. 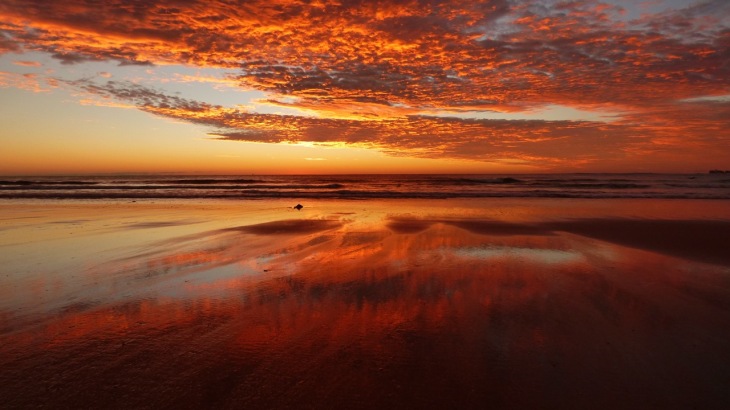 The sunsets equally so.

(And I couldn’t photograph either of them enough.)

It’s hard to believe we camped at Dicky Beach for almost five weeks, although we had an ulterior motive for doing so – finding a new home – and we’ve done that now.

We’ve secured a block of land and are at the stage of finalising the house plans and securing a contract with a builder.  What an exhausting process that is, but hopefully (and yes my fingers are crossed) come mid-December we’ll be making our final payment in exchange for the keys to the front door.

Now though the time has come to say: “Goodbye Dicky Beach – Hello Brisbane!”

Thoughts on Location No 108

We’re no strangers to Dicky Beach, and no strangers to the caravan park there.  Just a few steps away from the sand, the park itself is very popular and we’ve been there many, many times over the last 20 (or more) years.

It used to be our favourite caravan park, but after all the other parks we’ve stayed in over last 20 months, sadly it wouldn’t even rate a mention on what I would consider our Top 10 Caravan Parks.  Run by the local council, I certainly think they could learn a lot from privately owned parks.

But we enjoyed our stay, accomplished what we’d set out to do once we arrived, and yesterday we said goodbye and drove down the highway to our daughters’ place on the north side of Brisbane.

For the next five weeks, we plan to have a wonderful time catching up with family and friends.  After that, it’s back up to the north coast to do some more house sitting while we wait for our new home to be built.