Seven weeks ago, I attended the Queensland Garden Expo with my friend Lisa.  You might recall me mentioning Lisa before.  Last November she dragged me along (kicking and screaming of course) to the Sunshine Coast Frangipani Farm open day, where I thought I was in Frangipani Heaven and ended up buying cuttings from three lovely species.

Lisa is very good at letting me know when and where there are plants to be had. But this was not my first visit to the Qld Garden Expo.  Locally referred to as the Nambour Garden Show, I attended last year with my friend Muriel.

This year, Lisa and I headed off early, arrived as the gates were opening, and proceeded to scour the plant stall for bargains.  There was plenty to be had, as well as others to merely sigh over.  “Perhaps next year,” we told ourselves and made notes on our mental wish lists.  But that’s not to say we left empty-handed.  Far from it.  At one stage I thought I’d have to play nursemaid to all and sundry purchases while Lisa went and got the car.  A quick reshuffle and repack of the trolley – yes, we had a trolley – and we both believed (hoped and prayed) we’d make it back to the car without any casualties.  I’m pleased to report we did.

Fuchsias belong to the Onagraceae family of flowering plants, also known as the willowherb family or evening primrose family and there are approx. 110 different recognised species of fuchsia.  Most are native to South America, but a few occur through Central America and Mexico, and there are also several species spread from New Zealand to Tahiti. There is even one species (Fuchsia magellanica) that extends as far south as the cool temperate region of the Tierra del Fuego archipelago off the southernmost tip of South America.  However, the majority are tropical or subtropical.

They come in all sorts of plant types but mostly fuchsias are shrubs that vary in height from 20 cm to 4 metres tall (8 inches to just over 13 feet).  Now that’s not a small shrub, and yet there is one species in New Zealand (Fuchsia excorticata) that and can grow up to 15 metres tall (49 feet).  I’d like to see one of them in flower.

Fuchsias are named after Leonhart Fuchs, a 16th-century German doctor who gained horticultural credibility by publishing a herbal in the 1540s, but sadly, he never actually laid his eyes on a fuchsia.  It’s interesting to note that while the pronunciation from the word’s German origin is ‘fook-sya’, the standard English pronunciation is ‘fyu-sha’ and, as a consequence, fuchsia is often misspelled as fuschia in English.  I have often been guilty of this.  But I was reading how Leonhart Fuchs’ surname helps us remember how to spell the name of the plant correctly – ‘Fuchs’ with an ‘ia’ at the end.  Now that I know this, I think I shall never have trouble spelling fuschia again. Oops – I mean fuchsia.

It’s not hard to see why fuchsias are prized for their very attractive, drooping teardrop-shaped flowers that are usually found in abundance during summer and through to autumn, and even all year-round in the tropical species.  Again, it’s interesting to note that almost all garden fuchsias are hybrids that have been bred to produce stunning showy flowers.  They have four long, slender sepals (the petal-like parts at the top of the flower) and four shorter, broader petals.  Usually, the sepals blend or contrast in colour with single or double petals that flare out below.  Their stamens protrude from beneath the petals and look like a bunch of skinny, dangling legs.

In many species, the sepals are bright red and the petals purple but the colours can vary from white to dark red, purple-blue, and even orange.  Apparently, not all varieties are pendulous, however, those that are are ideally grown in hanging baskets or pots so their flowers can be seen from below.

All these characteristics blend together to create a perfectly charming flower and, because the blooms are usually prolific, the effect is like a group of full-skirted ballerinas either waiting to move across the stage or, when a little breeze is blowing, dancing their way into stardom.

Rohees New Millennium is a hybrid that was registered back in 2000 (hence ‘new millennium’ in its name) and it is pendulous which is why I’ve placed it in a hanging basket.  One website I visited said it was a hanging fuchsia, but another said it was an upright variety and yet another website indicated it was a trailing ground cover.  I guess I’ll just have to see how it behaves in the hanging basket and be aware that I might have to put it into a different type of pot/container if it doesn’t like hanging down.

So far, I’ve had two blooms open up. 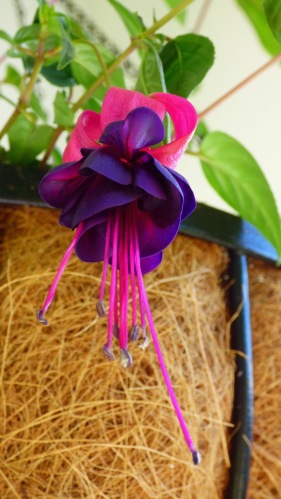 This is simply gorgeous 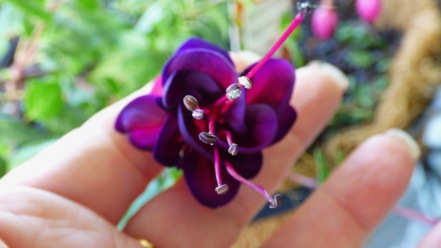 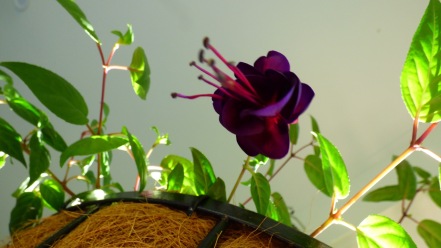 This one was dancing in the wind

One website I visited mentioned Rohees New Millennium has “. . . fully double, dark red / schwarzpurpurfarbigen flowers“.  Schwarzpurpurfarbigen?  I had no idea what that meant, so I had to look that up too. Schwarzpurpurfarbigen (or I’m guessing more accurately, schwarz purpur farbigen) is German and roughly translates to ‘black-purple coloured’ – thanx Google translator.  Now there’s a colour after my own heart. 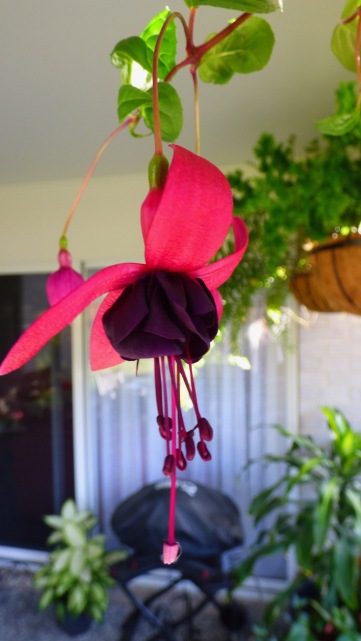 Those petals look rather black purplish in colour to me. 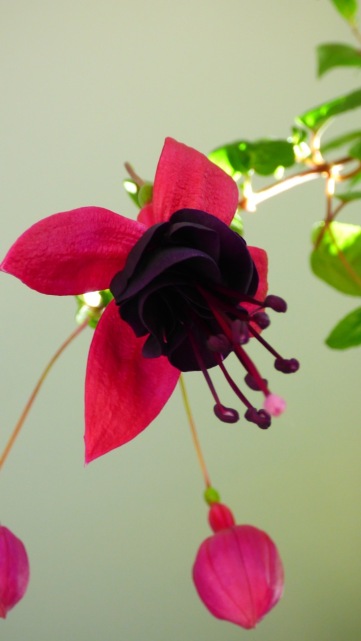 Hard to capture from below when there’s a slight breeze.

Oh yes, this is a colour I always find myself drawn towards.  No wonder I chose this fuchsia from all the varieties available at the garden expo that day and even though those sepals are meant to be dark red, they look bright pink to me, and that is why this is the next plant I’ve selected to highlight for Becky’s ‘In the Pink’ Square in September photo challenge.

The opened flowers aren’t the only aspect of this plant that’s attractive.  Just look at these little lantern-shaped buds.  Don’t you think they’re cute?  I do.

Hanging down, they sway in the breeze like little Chinese lanterns strung overhead.

With barely contained anticipation, I’ve been watching one bud increase in size and eventually open to reveal the hidden treasure inside since the beginning of August.  Seriously, I thought it would never open, and now, I guess because today is the first day of Spring and the weather is finally warming up, there are lots of buds appearing – a promise of all the pretty little things to come. 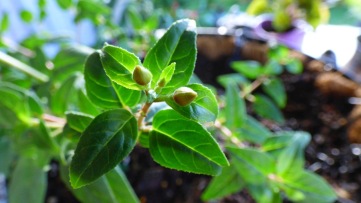 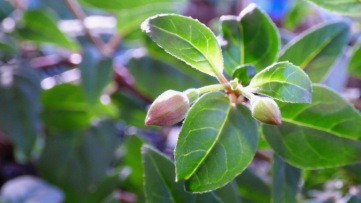 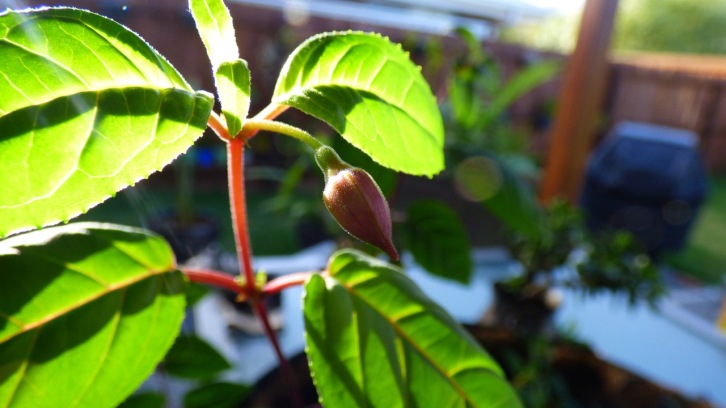 Perhaps, if I do have success growing this fuchsia, I should consider buying another.  They are so pretty.

Alas, this is not the first fuchsia I’ve tried to grow.  I did purchase a traditional single last year and, for quite some time, it grew and threw out masses of flowers.

Sadly, I killed it and I’m not sure why, or how.  Perhaps I over watered it, perhaps I didn’t give it enough water.  Perhaps I didn’t have it in the right position.  I have no idea what I did wrong but what I can say is, while it lived, I adored it’s little dancing ballerinas and I look forward to it many more performances from my new fuchsia.

Here’s something else I didn’t know that you too might find interesting.  The fruit of all species and cultivars is edible and, although the fruits of some fuchsias are flavourless or leave a bad aftertaste, Fuchsia Splendens is the best tasting with a flavour comparable with citrus and black pepper.  And it can be made into JAM.