As the rain continues, I’ve once again delved into my archives to locate a photo to share for Becky’s ‘In the Pink’ Square in September photo challenge.

I do name some of my plants, and this one is called Peppermint Patty in honour of my Aunty Pat. (You can read more about why here).

Hoya belongs to the Apocynaceae family of flowering plants that includes a wide variety of trees, shrubs, herbs, vines and even stem succulents commonly known as the dogbane family.  Here’s a scary thought though, dogbane is Greek for “away from dog” because some plants within this species were used as dog poison.  But that’s enough of the scary stuff.

Hoya is more commonly know as wax plant, wax vine or wax flower and it was botanist Robert Brown who named this genus in honour of his friend, and botanist, Thomas Hoy.

Hoyas are evergreen perennial creepers or vines but can also be found as a shrub, although they are rare. They can grow as epiphytes on trees or even on the ground and have been known to grow in rocky areas. Larger species can grow up to 18 metres or more (59 feet) providing they have the required suitable support from trees.  I certainly hope my Happy Little Hoya doesn’t get any ideas about taking over the back garden.

Hoya climb by twining around a support and the assistance of their adventitious roots.

The leaves of the Hoya are typically succulent, and at times I’ve thought the leaves on mine looked rather plump and waxy, but it’s the flowers that are the showstopper of this plant.  They appear as umbellate clusters at the tip of peduncles.

Ok, in English – they grow from the vine at the point where the leaf is attached to the stem, and in almost all cases, they hang down. The colour of Hoya range from white to pink, but there are species that exhibit yellow to orange, dark reds to near-black, and there even those that have green flowers.  Regardless of their colour, they are pendulous and perfect and best enjoyed when viewed from beneath.  My Aunty had her’s growing on a (rather large) trellis.  You’d walk beneath and be in awe of the blooms hanging down from the vine. She’d walk you out the back beneath her trellis and ask, “Aren’t they just divine?”  Divine indeed Aunty Pat.  (Divine was her favourite word.)

But what makes these flowers so attractive is their individual flowers that are typically star-shaped with five thick, waxy triangular petals.  But that’s not all.  They are then topped with another star-shaped structure, the corona.  It’s like two for the price of one.

A cluster of buds

A cluster of opened flowers 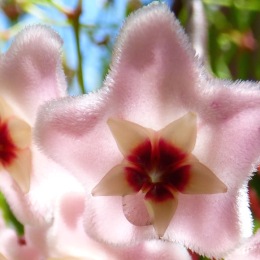 Many Hoya are very sweetly scented and produce large quantities of nectar.  Earlier this year, I could hardly photograph the flowers for all the ants stealing that precious sugary liquid.

The beauty of Hoya is that they don’t demand a lot of attention and reward even the most off-hand gardener.  I have said before that I am not a neglectful gardener, but I don’t fuss too much over my Hoya, and it does reward me for leaving it alone.  I believe, once hooked you’ll want more – I know I do – and I do have another cutting that has recently taken root.  It was gifted to me by my friend Muriel and I have no idea what colour it is, I just have a sneaky feeling it’s red as I’ve seen Muriel’s red one in bloom.

I guess I’ll just have to be patient and wait and see.  Thankfully, though the cutting might only be small, it already has a flower cluster sprouting.

Don’t fall into the rookie mistake of picking the flowers.  As it turns out, most Hoya flower on the same bud nodes year after year and by picking the flower, you rob yourself of any chance of having flowers on that stem again.  Better to have them in a pot that you can bring inside to enjoy the flowers and their sweet fragrance.

I'd love to hear your thoughts ... Cancel reply