This nasty little plant is a succulent climbing shrub that can grow to 1.8 metres (just short of 6 feet) with stems that are covered in spines up to 3 cm long (1.2 inches) that help it scramble over other plants.  (Why it needs to do this probably has a lot to do with survival in its natural habitat.)

This is Euphorbia milii, a species of flowering plant in the family Euphorbiaceae also referred to as the spurge family. Euphorbia milii is also known as the Crown of Thorns, the Christ Plant or Christ Thorn because some people claim that its branches were cut to make the crown the Romans put on Jesus.  Being a native plant of Madagascar, I doubt that very much, but that doesn’t make it any less a nasty little plant.

Ok, perhaps I’m being too harsh.  Just look at these gorgeous ‘pink’ flowers.

Although Euphorbia milii is primarily red, and indeed, my plant is a red one, according to ColorHexa*, in my photo, the colours of the flowers are described as ‘soft pink’.  Perhaps it’s all the dew, but I’m not going to argue with ColorHexa and therefore, this is my next photo for Becky’s ‘In the Pink’ Square in September photo challenge. I took the dew covered photos yesterday morning.

This morning I played a little more with my camera.  The same plant, the same four flowers, but photographed in three different positions with varying levels of light.

Soft Red – looks pink to me 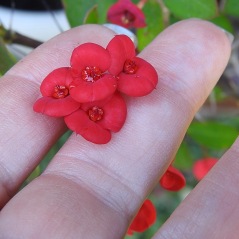 So what I have here are four photos of the same four flowers and four distinctly different colours.  Each photo was taken with exactly the same settings on my camera.  It just goes to show, sometimes the colours aren’t true. (I don’t, and haven’t, edited my photos in Photoshop. What you see is what the camera saw, nothing more, nothing less.)  Sorry, Becky, this really is a red flower, not a pink one, though this plant does come in pink as well as white and of course, red.

Euphorbia milii might look gorgeous with all that dew covering it, but the sap of these plants is moderately poisonous and causes irritation on contact with skin or eyes. If ingested, it causes severe stomach pain, irritation of the throat and mouth, and vomiting. They are highly poisonous to dogs.  (I said it was a nasty little plant.)

However, because these plants are so prickly, accidental poisonings are rare.

Those are the brats 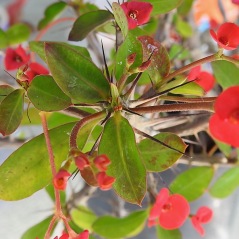 Look at those thorns

Enough of the scary stuff.

The flowers of the Crown of Thorns are tiny and surrounded by two conspicuous petal-like bracts.  Take a closer look at the middle photo above.  That little structure in the middle is the flower, the bright red bracts are merely modified petals.  Blooms appear mostly throughout spring and into the summer, however, in ideal conditions, the plant can produce flowers year-round.  Certainly, my little plant – hidden away where it cannot harm anyone – has had non-stop blooms for the past 18 months.

In Thailand, it is said that the number of flowers on a Crown of Thorns plant foretells the luck of the plant keeper.

I must be very lucky indeed.

I used Colour Picker Online to upload the photo and obtain the hex value of various areas of the flower, then used ColorHexa to identify the colour.