Recently, I was introduced to the “Eat that Frog” principal.

Put simply, if the worst thing on your to do list is to eat a live frog, then, have your own personal Nike moment and just do it.  Get on with it, pull up your big girl panties or big boy boxers, and eat the frog.  Then, having done that, nothing for the rest of the day will be as bad or as difficult, and you’ll be free to (relax and) enjoy the rest of your day, most likely doing pleasant tasks or, at least, eating nicer food.

Could you eat a live frog?

There’s a quirky little YouTube video you can watch by clicking here and you can also read about the origin of the saying here if you like.

I’m not about to argue or analyse Brian Tracy’s approach to overcoming procrastination, however, of late I was faced with a particularly nasty task.  It was mine, and mine alone.  I had a live frog to eat.

But rather than pulling up my big girl panties and facing it square on, I decided to ponder, to give it more thought, to (continue to) mull it over and over in my mind.

I looked at it from every conceivable angle – and I came up with thousands of them.  My mind didn’t know where, or when, to stop as I continued imagining more and more ways of eating my frog.

I clenched my teeth over it, giving myself a headache.

I tossed and turned all night, losing precious sleep (and keeping Dean awake in the process).

I could feel my blood pressure increase as I avoided doing something that had to be done.

With every passing hour, I was making myself sick pondering the how of doing it with no newly conceived idea any more suitable than the previous, or first for that matter and, all the while, my live frog sat there, giving off the occasional croak waiting for me to get on with it.

And a little voice inside my head kept saying “Eat that Frog!  Go on, eat it, eat it!”  At one point all it said was “Eat, it, eat it, eat, it, eat it!” together with a full orchestral complement of strings and percussion courtesy of Weird Al Yankovic’s parody of Michael Jackson’s Beat it.

This was starting to taste very weird indeed. (Pun intended.)

Yes, I delayed and deterred for more days than I care to admit, but finally, I took a deep breath, closed my eyes, (crossed my fingers) and tackled that nasty task.

I’d be lying if I said it was easy because it wasn’t.  That’s why I’d been doing everything else instead.  I’d been foolishly hiding my head in the sand, ignoring my problem, and hoping it would magically go away of its own accord.  I’d been hoping I didn’t have to eat my frog.

But I must admit, even with the bitter taste of frog still in my mouth, the first thing I felt was relief, a lifting of a burden – one of my own making for sure – but still, the physical weight of it lifted and what I felt was, well, I’m not sure what the right word is, but ‘free’ comes to mind, liberated, no longer enslaved by a task I didn’t want to do, and yet was the only person who could do it.

And the reward I received for having tackled it first thing one morning?  A whole day to feel energised and enjoy all my other (pleasurable) tasks knowing there was nothing else to do that could possibly be tougher than eating a live frog.

I like this “Eat that Frog” principle.  It works!

Have you ever avoided something?

What effect has it had on you?

Look at this gorgeous face. 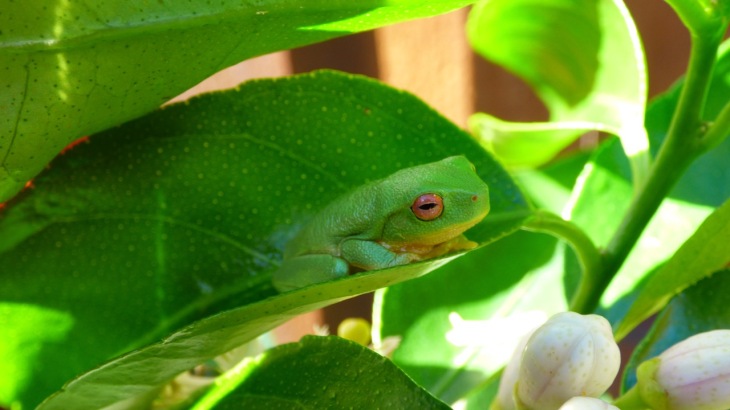 I am glad that eating frogs is a metaphor for overcoming procrastination and not something I had to do literally.