Only Five Months in the Making

I first saw the flower developing on my pineapple in September last year and was delighted that, after a wait of longer than two years, finally, flowers were developing.  I imagine the flower had started developing a few weeks before I noticed it which makes it a six month period between development and the eventual devouring.

I had no idea, it would take the fruit that long.  Gardening has taught me many things.  Patience for one and by mid-January, the first was pineapple beginning to show signs of ripening.  By late-January, little back ants were finding my pineapple a sweet temptation so I decided to spoil the plans of those ants.  I picked it so I could enjoy it.

I left it on the bench in my kitchen for four days.   It was a proud, magnificent flower on display and, during this time, it ripened a little further.

I then separated the top from the bottom, planted a new pineapple plant in my front garden, and put the fruit into the fridge while I dreamed of its sweet goodness for another week.

Work has been hectic and kept both of us busy, too busy to relax and enjoy my edible garden delight.

But when we did have the time to do so, it was well worth the wait.  Don’t be fooled by photos that make it look overripe. 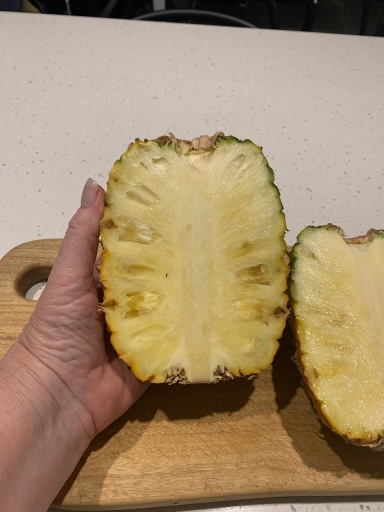 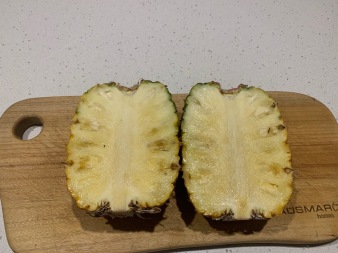 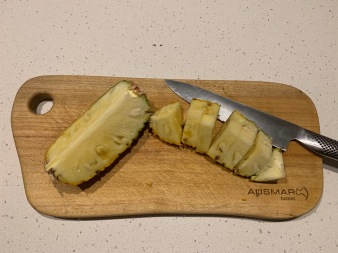 Our builder will be pleased I’m still using that cutting board.

It was sweet and juicy and enjoyed by both of us and I’ve now gained newfound respect (if that’s what you call it) for primary producers and hobby farmers and all the trials and tribulations they face in providing us with fresh fruit and vegetables.

My pineapple took more than two years to flower and another five months for the first fruit to ripen.  During this time it was repeatedly rained on, and even waterlogged, in the first year.  It dried out due to lack of rain (and lack of watering on my part) during its second year, and when it finally reached maturity, throwing out a flower in its effort to reproduce itself before dying (as Bromeliads do), it was pummeled by hail – twice.  The plant itself sustained a considerable amount of damage, but although there were a few marks on the fruit, it seemed to have been spared.  Perhaps the fact that it was still developing and nowhere near ripe back in November helped. (See A Tale of Woe and Meet the Survivors)

The day I picked this first of my two pineapples, my neighbour said:

“I cannot believe you’ve grown pineapples in your front garden.  We’ve been watching them develop as much as you have!”

I must say, this plant has given me as much (if not more) pleasure as any other plant I’ve grown over the last three years and this morning I’m going to inspect the plant this one was taken from to see if it has thrown additional pups.

Maybe I’ll end up with a much large pineapple patch out the front.  One thing’s for sure.  When the second pineapple ripens, I’ll not be throwing the top away, but also planting it back in my front garden and (patiently) waiting another two years for more edible garden delights to appear.