(Sorry, I can’t remember what this meal was called on the menu.)

We arrived after 6:00 pm to find the hotel less than busy – ok, there were only a few people there causing me to ask if they served meals in the bistro on Sunday nights.  We thought we would sit outside, but the smoking laws are different in New South Wales than in Queensland and one whiff of the dirty ashtrays full of butts and we turned around and went back inside.

This should have been sufficient evidence to make us leave, but I was looking forward to my favourite pub grub and could only focus on that.  As we sat waiting for our meals, I noticed just how dirty the dining room was.  I think it had not seen a broom or mop for quite some time. 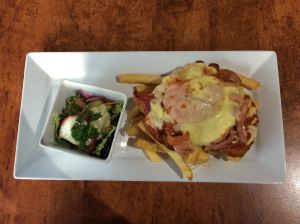 Chicken
The schnitzel was not whole breast, although I could see it was ‘fabricated’ from breast meat.  Parts remained moist and tender, but other areas of the schnitzel were dry and I guess this was due to the meat being thin around the edges.

The crumb went soggy all too quickly resulting in ruining the chips and the meal in general.

Sauce
The sauce was very basic and lacked a little punch.  Initially I thought it was tasteless and had to try some ‘solo’ to appreciate that is actually did have some flavour.  There was lashings of bacon on top of the schnitzel and lashings of mozzarella cheese on top of that.  Too much bacon, too much cheese.  I didn’t eat all the bacon (it was less than cooked in my books) and scrapped the excess cheese off as it was too heavy for me to eat.  This was the point at which the crumb fell off the schnitzel revealing the ‘meat’ beneath.

Extras
The salad was small, pre-prepared and warm on top with too much creamy dressing, but I have to say the addition of a few slices of celery gave it a unique flavour that ensured I ate all of it.  (Minus some of the dressing.)

The chips seemed to be fresh but I quickly discovered that was only a few of them.  The soggy crumb on the schnitzel ruined the chips before I could enjoy eating them and it wasn’t long before they resembled chips that had been left waiting far too long to be served after being cooked.

I gave this Chicken Parmigiana 2.5/10 overall because upon reflection it may have looked good and seemed nice when I started eating, but it’s almost as if the meal deteriorated before my eyes and before I had a chance to actually enjoy it.

It was not very nice at all and as we left I said to Dean:
“That has put me off eating Chicken Parmigiana again.”  😦

Next time, if it looks bad or smells bad, or even feels bad, then it probably is bad.